Lorna Suzuki: The Challenges of Writing for a New Audience 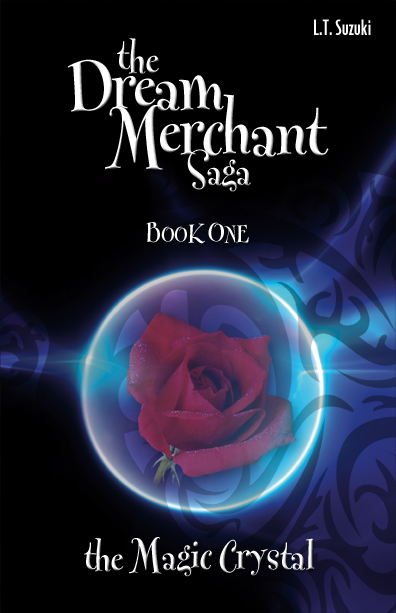 Today I present something a little different for KatTales, in the form of an interview with local fantasy author Lorna Suzuki. Lorna is the author of the 9 book Imago series. She's launching a new YA fantasy series, The Dream Merchant Saga. KatTales is pleased to host Lorna's blog tour for Book 1, The Magic Crystal.

Lorna and I will be talking about the challenges of writing for a new audience, or switching gears to write for the YA audience. Be sure to check out the rest of the stops on her tour below!

K: What inspired you to want to write for a younger audience after building your early fiction career on a 9 book series for adults?

Lorna: I’m always looking for that next challenge, but because I’m getting too old to take up the physical ones, it seemed natural to take on a writing challenge and branch out from the adult epic fantasy genre. Plus, this was an opportunity to write a book my daughter could read in its entirety! With the Imago series, I would allow her to read the abridged, watered down version where I’d gloss over the adult content and graphic violence in order to not warp her impressionable young mind. With The Dream Merchant Saga, this was a YA trilogy she, her cousins and friends could enjoy without me censoring, gluing or paper clipping pages together on them.

What was the biggest adaptation you had to make in your writing with the switch to YA?

Toning down on the violence and eliminating the sexual content was a must, but I think shifting gears to write a novel tweens and teens with mature taste in YA literature could enjoy required finding a new storytelling voice they could relate to. By this, I do not mean being an adult trying to talk or sound like the teenage characters. Instead, it was more like consulting with my daughter to find a voice to relay a story containing issues her generation could relate to, and then using vocabulary and dialogue suited for this age group (12+).

You are also dealing with an age group whose attention span requires the author to keep action or conflict present on practically every page. I’m not just speaking of physical conflict in the way of epic battles, but there must be a level of tension whether it is personal conflict between the characters, conflict with their environment or situation (i.e. battling the hostile elements or racing against time) or the internal conflict of a troubled character. There’s got to be something there that will drive them on to keep the pages turning to the very end.

After 9 books for adults, was it a struggle to understand and reach an entirely new market?

Luckily, my daughter is not embarrassed by me and allows me to talk and interact with her friends, all of whom have elevated me to the status of being ‘cool’ for a mom. And having many nieces and nephews to converse with during family get-togethers, it’s a sure way to better understand this generation; their hopes, desires and daily struggles as they navigate their way through a world that is no longer a kinder, gentler place. They are growing up faster and they’re faced with situations we never even dreamed of back then. When I was a kid, the most that would happen was the occasional fisticuff on the playground resulting in a black eye or a bloody nose. These days, you look in the newspaper and you’ll read horrific stories, like the one about the teenagers who swarmed a fourteen-year-old girl, murdering her and leaving her body in a river under a bridge. They swore not to rat each other out, but a skewed sense of loyalty, the inability to do the right thing, caused so much grief to the dead girl’s parents. I also noticed that for some young people there is some confusion between finding justice and getting revenge.

The issues of loyalty, friendship, trust, self-sacrifice and the search for self have woven their way into this YA fantasy.

Have any of your early or beta readers for The Magic Crystal been teens, and if so, what surprised you most about their reactions to the book?

Any author who throws his or her book out to the masses will soon discover, if they did not already know, strangers who don’t know you from a hole in the ground will be far more critical of your work. I believe the best way to see how your book will fare in terms of public scrutiny is to subject your work to other writers (a critique group is always handy for this). Being a glutton for punishment, I like to circulate the ms to male and female readers from ages 12 to 50+, ranging from elementary to university educated to see how it stands up in terms of general appeal. I deliberately select a tough audience by having teens that admit they hate reading and would rather spend their time watching movies or playing video games have a go at the ms.

Believe me, when a teenager who doesn’t care for reading is engaged and entertained right up to the last page, and when he’s done, asks if the sequel is ready, you know your work will likely be able to stand up to public scrutiny pretty well.

As for their reactions? I was pleasantly surprised it was so well received across the board, especially by the teen who hates to read and the adult who doesn’t normally read YA fantasy!

What have you found most gratifying about writing for young people, compared to writing for adults?

That’s a tough one, as I’m still so new to the YA genre. The young people who have test read Book One of The Dream Merchant Saga, having seen the proof copy are eager to read a nice polished book. But even before they could get their hands on this one, they were already asking about the sequel. They wanted to know if it was ready, or at least if the writing was underway, and they wanted to know what the next adventure is going to be about.

The adults seem just as eager to read this book as well as the final novel in the Imago series, however I found the adult readers tend to be quite vocal. By this, I mean the teens just take the story in and appreciate it for what is it, while some of the adults, even if they loved the story, have been very upset with me for killing off some of their favorite characters or I’ll get the odd email or Twitter message from a reader telling me they’re on chapter so-and-so and how I moved them to tears with one of the passages. I suppose from an author’s perspective, it’s gratifying to get that type of strong emotional response to your writing.

So, between this and having one of the test reader’s parents tell me her son could not stop reading, and then to see the smile on his face when he discovered I was already working on the sequel, both are priceless! Overall, I’d say it’s equally gratifying just knowing my books are being read and enjoyed by young and mature readers!

Thank you so much for hosting, Katrina. It was fun! I’ll catch you on Twitter.

Join Lorna for Day 6 of the blog tour when she discusses “Writing Outside the Box” with Caroline Leavitt at her blog site: http://carolineleavittville.blogspot.com/

For more information about Lorna Suzuki and her fantasy novels, check out http://web.me.com/imagobooks

2 comments on “Lorna Suzuki: The Challenges of Writing for a New Audience”