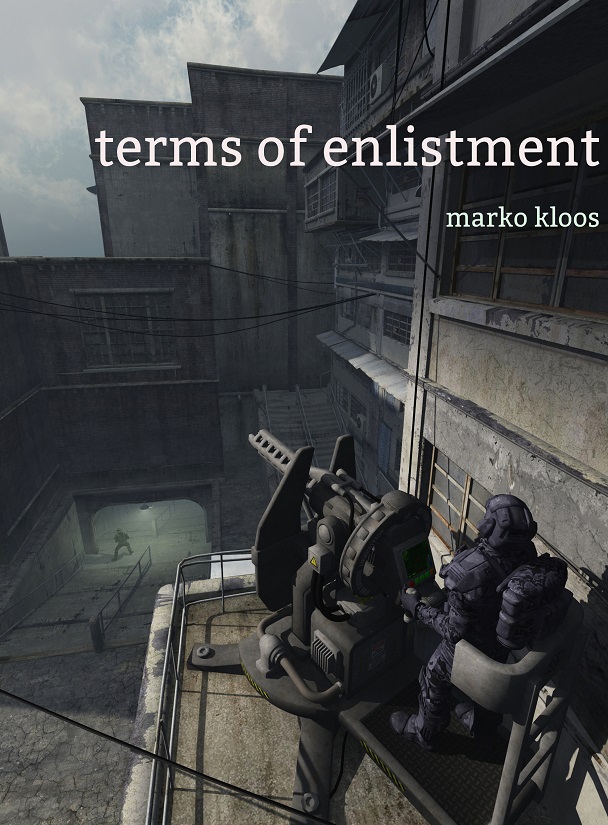 Marko Kloos's debut military SF novel, Terms of Enlistment, demonstrates how one author parlayed deadline panic into a wildly successful publishing endeavour. I couldn't be happier to be featuring Marko on Prime Writing today, because it's always great to see good things happen to nice people.

I’d like to claim that Terms of Enlistment has an involved and fascinating genesis in multiple intricate ideas, all woven together in years of preparation...but the truth is that this particular novel came about because of procrastination.

I read about the Viable Paradise SF/F Writers’ Workshop some time in early 2008 and thought to myself that it might be a good idea to get serious about this writing thing and send in an application. Of course, I promptly forgot about it until about two weeks before the application deadline. The guidelines called for an 8,000-word sample of a novel in progress. I had two weeks to go, but I had no novel in progress. I had a few chapters of a fantasy novel I had noodled with over the years, but it wasn’t very good yet. I gave it to my wife to read, and she concurred, diplomatically suggesting that I may want to send in something else.

Last-minute deadline panic is one of my most effective motivators.

I sat down and tried to figure out what to write. I didn’t want to go with yet another attempt at Generic High Fantasy Novel #291 (“Now With 100% More High Elves! At Least Three Apostrophes Per Name GUARANTEED!”). The year before I had read John Scalzi’s excellent Old Man’s War, and the Viable Paradise information said he’d be an instructor that year. Old Man’s War is military SF, a genre I’ve always enjoyed reading, and I figured that if it’s fun to read, it may also be a lot of fun to write. I also wanted to have a chance to sprinkle in sensory and verisimilitude details from my own four-year stint in the German military, and MilSF seemed to lend itself to that.

“Young Man Goes To Boot Camp” is practically a genre staple. Because I wanted to write a military coming-of-age adventure, I would have to start at boot camp as well. But even if I didn’t outright want to subvert the trope, maybe there was a way to make it unique and interesting, and not your generic Super-Tough Boot Camp Experience.

What if the drill instructors don’t care whether you made it through or not? What if their pool of applicants is so high that they can afford to wash out 90% of recruits without having to lay a hand on anyone? You’d have to make military service so attractive that the young people of that society would flock to enlist. Military service is hardly ever a pleasant career, so you’d have to make it that not getting accepted into the service meant an even crummier life. You’d have to live in a real crapsack world to consider fighting interstellar wars an improvement of your life conditions.

From that, I came up with Earth in the 22nd Century: overcrowded, dirty, constantly low on resources, constantly strife-torn. And I came up with my protagonist, Andrew Grayson, a young man from the PRCs: Public Residence Clusters, the 22nd century version of public housing projects. In the PRCs, crime is sky-high, people have nothing to do except watch Network shows, and everyone gets a weekly 20,000-calorie ration of Basic Nutritional Allowance, artificially flavored soy mixed with reclaimed nutrients from human waste.

Stay in the PRC, eat chicken-flavored soy-and-shit meals, live a nasty and brutish existence, and die early. Join the military, and you get to eat real food, and if you make it through, they’ll give you a bank account and a retirement bonus that will let you get out of the PRC and into the middle class suburbs. In that kind of world, getting an induction letter and a slot in boot camp is practically a Golden Ticket.

Andrew Grayson has scored one of those Golden Tickets, and the novel starts the night before he ships out to boot camp. He thinks he has won the lottery, of course...but he soon finds out that things don’t usually go your way in the military once you’ve signed those enlistment papers. And he learns that access to real food, proper healthcare, and maybe a retirement account can come with a steep price attached. When part of your job description is to keep the unruly masses in the PRCs from spilling out into the ‘burbs, you may find that the $200 steak you had for lunch yesterday may come with the obligation to turn your weapons against your own people.

Marko Kloos was born and raised in Germany, where he worked as a soldier, bookseller, dockworker, and gas station attendant before he emigrated to the United States. He worked as a corporate IT drone for way too long before he figured out that he wasn’t cut out for the corporate life. Of all the forms of labor, making up stuff for money seemed like the least objectionable career.

Marko lives in New Hampshire with his wife and two children at Castle Frostbite, a mighty compound patrolled by a roving pack of attack dachshunds. His debut novel, Terms of Enlistment, is published by 47North and available from Amazon.com. The sequel, Lines of Departure, will be released in January of 2014. You can follow him on Twitter (where he spends way too much time) at @markokloos.