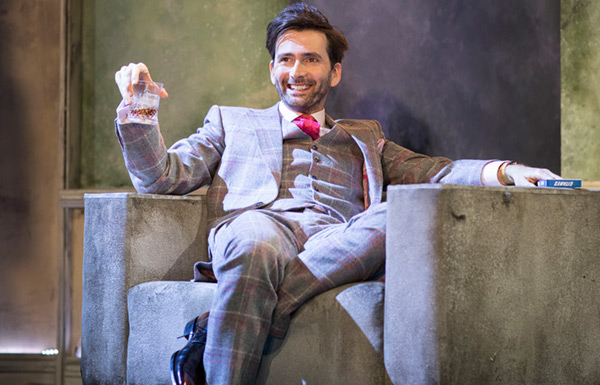 A Short Travelogue and Play Review

Let's get this out of the way: I lead a comfortable life. I have a good job, a roof over my head, have a great bunch of family and friends, and keep myself (probably too) well fed.

But the last 12 months have been a little rough around the edges. I had a brush with cancer that required surgery. On returning to exercise after a month off from that, I developed painful Achilles tendonitis and plantar fasciitis, which put most of my favourite activities out of reach and left me constantly sore and hobbling for 8 months. I gained an unpleasant amount of weight as a result. A close family member died. World politics went pear-shaped and left me stressed out. And after getting my hopes up for a professional breakthrough on the writing front, I fell short of the prize by a hair-thin margin that, well, threw me for a bit of a loop.

Not a banner year.

So when I saw from a friend's Facebook post that David Tennant had a new play out in London, I had a little sad. My first thought was, "London! Poo. Of course I can't go! That's halfway around the world. Plus it's probably sold out already." I gnashed my teeth about it for about 36 hours.

Then a gear tripped in my brain and a little voice said, "What if it's not sold out?" So I checked. And there were still great seats available. Then the little voice whispered, "Well, how much is a flight?" So I broke out the travel search engines and found a flight to London for less money than what I paid to get there back in 1992. Then I looked at my expected tax refund, and the little voice nudged me and said, "You know, you do have some spare change this year. Enough to funnel back into savings and do a little side jaunt."

That's when I said, "Fuck it. I'm going to see David Tennant's play because it will make me happy, DAMMIT. Screw the jet lag." The jet lag, incidentally, was the highest price paid: two 9+ hour flights with a grand total of 8 hours time difference each way, with only 72 hours on the ground. *bleurgh*

So that's how I wound up seeing Don Juan In Soho at Wyndham's Theatre in London's West End this past weekend. I rarely review plays because I rarely attend plays, but here goes.

I loved Don Juan In Soho, but I didn't want to. That's probably the whole point. David Tennant plays DJ, the titular cad, with Adrian Scarborough as his long-suffering right-hand man. Tennant is genius casting, because his charisma and charm seduce you into rooting for the character, even though he's despicable.

Rather brilliantly in a meta kind of way, the play abuses and manipulates its audience almost as much as DJ abuses and manipulates his hangers-on. The zany comedy, hilarious slapstick, occasional dance number, and chemistry between the leads suckers you into laughing at some pretty repulsive behaviour. For some, it was too much: the couple next to me didn't return after the interval. It was one of the crudest, most vulgar, misogynistic, at times racist pieces of entertainment I've watched. I can perhaps forgive the Brits for not knowing how offensive the term "Eskimo" is to First Nations, but given the rest of the content, I suspect the usage was intentional. I also had a personal pout at the "moustachioed Ukrainian" jab—the truth hurts almost as much as the plucking middle age has forced upon me.

The one-liners come fast and furious. Tennant's sheer physicality is mesmerizing—he throws himself into the part with complete abandon—while Scarborough matches him effortlessly as the quintessential straight man. Though some of the farce didn't work for me, I do hope to never be the recipient of a gaze as filled with contempt and disdain as Tennant's as he looks upon those DJ considers his lessers. And I was astonished that during one particular scene, upon observing what Tennant was doing to one of the actresses on stage, no one in the audience stood up to shout "I VOLUNTEER AS TRIBUTE!"

Ultimately, though, the seduction doesn't work. The people in DJ's orbit—with the exception of Elvira, his wronged wife, whom I was glad got to exit with dignity—keep returning for more because they can't help falling for him. But while you in the audience want to love DJ, and you ache to have him turn his charm upon you, you know you'll just get burned. In his major speech, when DJ tries to justify his actions and his life philosophy by pointing out the hypocrisy rife in the world, and claiming that at least his actions are honest, all I could think was "Bullshit." He is either the biggest hypocrite of all, or has succeeded in deluding himself: the actions of other bad actors don't justify or absolve the hurt you do to others. I wasn't sorry to see DJ's final comeuppance. I was only sorry it meant saying goodbye to Tennant.

My experience with the play didn't end at the play. The next morning, in search of brunch, I walked into a random restaurant suggested by my hotel. The couple ahead of me were arguing with the maître d' about the hour-long wait for a table, so I figured I'd have to forage elsewhere, but when it came to my turn, I was told that singles were fine, and seated at a stool at the far end of the bar.

I toasted my jet lag with a glass of sparkling wine, and the subject of why I was in the UK came up with the bartender. Who then grinned at my answer. "Don Juan In Soho? I'm the assistant set designer. How did you like the play?" I gave him my review above, and we then proceeded to have a lovely conversation about set design, the rickshaw and the statue that were key elements in the play, architecture, the long slow builds of certain careers, and working with creative people, among other things.

When he found out about the short length of my stay, he—like the border guard, and everyone else I met in London—said, "You must be a big David Tennant fan." Yes. Yes, I am. That's the simple answer. There's a more complex one that I didn't mention to anyone I met, and that has to do with the relationship between some of Tennant's performances and my own creative writing output, but getting into the subtleties of that with a border guard just isn't worth the hassle. "Did you stay to try to see him at the stage door?" Yes I did. But I felt weird about it, and ultimately didn't get to shake his hand or meet him or anything, because the scrum bothered me, so I stood at the fringe. The whole idea of being in a shouting crowd of people like that and clamouring for 10 seconds of attention felt horribly needy to me. I can see why people do it, but if I'm ever to meet an actor I admire, I'd rather relate to them as a human being than a show pony. Liam the set designer and I both agreed that is one of the less savoury aspects of celebrity.

I don't travel alone that often, and my Canadian reserve typically means that when I do I don't interact with many people, but I got out of my shell a bit more on this trip and met quite a few people: a group of French tourists and then two English ladies on a night out kept me entertained on my first terrace. An older Danish gentleman and I talked climate change and the differences between North American and European culture at our neighbouring tables at dinner. I even said hi to an actual celebrity when Devon Bostick (Jasper on The 100) wandered past my first bar terrace, although my jet lag turned me into the worst sort of gabbling fangirl ("Great show! Love your work!" Oh you loser, did you really just say that?) My good friend Jeremy came down from Leeds and walked the Thames for miles with me. And Liam B. serendipitously kept the magic of the play going at brunch.

On the flight home, I mainlined Season 3 of Broadchurch, which I hadn't had a chance to see yet. It was the perfect length for a 9-hour flight. It's kind of incredible to, in the same weekend, watch the same actor disappear into first a complete letch, and then a fundamentally decent man entirely at odds with rape culture, and be utterly believable as both. Mad props for acting craft, that's all I have to say.

So all in all, yes, despite the worst jet lag of my life, this trip made me happy. Thank you everyone for a great time, especially you, David. You did not disappoint. While I know it wasn't part of the deal, I'm only sorry I didn't get to tell you that—among other things—myself.

PS: Liam, if you're ever doing set design in Vancouver, I owe you a drink :-)